How Much Can NOT Measuring Hay Moisture Cost You?

If your profession has you handling hay on a day-to-day basis, you should already understand the significance of having the optimum moisture content (%MC) before and after baling. The consequences of neglecting to monitor the moisture can be extremely hazardous and costly to your company, farm or organization.

In business, part of making a profitable company entails analyzing where you can cut costs in order to maximize your profit.  However, when it comes to hay, this is one area where you do not want to change course. In this post, we’ll shed light on the dangers of not measuring your hay’s moisture and what you should do instead to ensure a high-quality product and limit your risks. 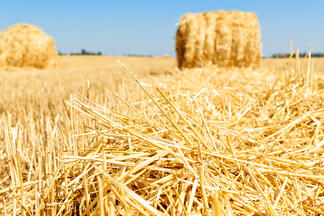 Overlooking the need to keep your hay at an appropriate moisture content level can weigh heavy on your operations and force you to have to perform more work than originally intended. The ideal moisture content for hay is somewhere between 18 and 20% if there are no preservatives added.

When hay is extremely dried and lacks adequate moisture, its value to the environment begins to decline. Scientifically, hay that comes out of a drought has the production of the seed and leaf stopped. These “dry coarse stems” of the hay, thus, don’t develop, significnatly reducing the nutritional value. The value is so low, in fact, that mold will refuse to grow due to the lack of moisture.

You can tell if the hay is too dry if the leaves of the forage become really stiff and brittle.

If you’re working on a farm, it’s crucial to maintain proper moisture levels for your livestock as it is the majority of their diet. In the same way that hay’s lack of nutritional value makes it unfit for construction, it also renders it useless to one’s cattle, pigs, sheep and goats.

On the opposite end of the spectrum, having too must dampness within your hay can cause even more hazardous problems.

As with most materials, having too much water can’t be a good thing as it can be a breeding ground for dangerous bacteria. In fact, hay with high moisture content is a playground for fungus to grow and for microorganisms to flourish. The higher the moisture content, the more risks that are associated with it.

Even worse, bacteria and mold will be trapped within the bale’s moisture and can likely multiply — using the nutrients as their food. In the worst-possible case, the hay will begin to retain heat due to these microorganisms’ growth — leading to the potential to combust. 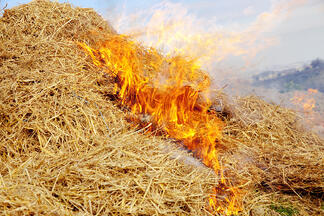 This scenario is the worst case scenario when considering hay and the effects of not properly checking your moisture content. Excess amounts of water within a hay bale leads to a process that’s called thermal expansion. This is when the bale increases in heat as the moisture within tries to escape.

This increased tension within your hay also means protein will begin to degrade. Once the hay reaches 180°, it becomes extremely likely that it will spontaneously combust, setting flames to the hay and whatever is nearby.

As the fire is an issue unto itself, a combustion can also wreak havoc on your area of work — or worse — your livestock.

No matter if it’s too dry, too wet or too hot, your hay is an investment that you had plans to work with. Its condition should be made a top priority so you don’t spoil your product and lose revenue in the process. To help ensure proper moisture levels, please be sure to take a look at our moisture meters today or contact one of our specialist to assist you!