Are You Ready for the Hay Harvest Season? 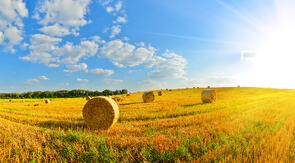 The hay growing season is upon us yet again, and farmers around the country are preparing to harvest their crops as summer begins.

In past posts, we’ve talked about what makes for top-quality hay. One of the most important factors in determining the quality of hay is its moisture content. Too much moisture, and hay can spoil or even spontaneously combust when baled. Too little moisture, and the hay loses its nutritive value as feed for farm animals.

Avoiding disaster means being prepared, and maintaining acceptable moisture levels in hay. With this in mind, how can you prepare for the hay harvest?

Get the Right Tools for Checking Hay Moisture Content

One important step in being prepared is to have the right tools on hand for the job. Tools such as hay moisture meters are a critical part of ensuring a top-quality hay harvest.

Available in both handheld and baler-mounted models, hay moisture meters (also sometimes called damp detectors for hay) can give hay growers a fast assessment of the moisture content of hay both in the field and in storage.

Ideally, you should have both portable and baler-mounted units so that you can get a complete picture of the moisture content of your hay before, during, and after baling.

Once you have the right tool for the job, how can you use your hay moisture meter to check the moisture content of hay in the windrow, during baling, and in the bale?

To test hay moisture in the windrow, you’re going to need two things:

Grab a sample of hay from your windrow and pack it into your bucket as tightly as you can. The more densely you pack the hay in the bucket, the easier it will be to get an accurate reading.

Once you’re satisfied that you’ve got enough of a sample packed in tightly enough, insert the probe of your damp detector for hay into it and activate the meter. Record your reading, and repeat the process a few times, inserting the probe at different angles. Average your results when finished.

Keep an eye out for areas of your windrow where the hay is thickest, and test more samples from those areas.

Using a baler-mounted moisture meter is easy, simply attach the meter to your baler as outlined in your meter’s owner’s manual, and activate it while you bale your hay. Keep an eye on your meter as you bale to see if your hay is drifting out of its ideal moisture range. Some models allow you to set alarms for when hay moisture falls outside of a certain range.

Testing hay moisture in a bale will often require the use of extended-length hay probes. The process is similar to testing hay in the windrow, but with the hay already being bundled up tightly. Simply insert the hay moisture probe into the bale and take a reading, record your results, and repeat the process from different angles in different parts of the bale. When done, average your results to determine the moisture content of the bale.

With moisture meters, farmers can quickly verify the moisture content of their hay in the field without sacrificing too much valuable harvest time, a must when dealing with fickle weather patterns during harvest.

Learn more about how to make top-quality hay in our free guide at the link below: