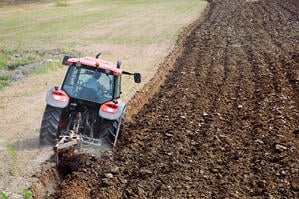 Farmed goods such as corn and wheat are among the U.S.’s most important exports. Countries around the world count on American-grown crops. In fact according to data from the Economic Research Service of the USDA, U.S. agricultural exports totaled more than 12 billion dollars in the month of April, 2014. That’s just one month’s export value, and that’s not even the highest amount for a single month in the last year.

Without the crops grown in the U.S., there are many people around the world who would find it much more difficult to put food on the table for their families. This is why so many farmers throughout America depend on a variety of high-tech tools to maximize the quality and yield of their crops. While many people are familiar with the tried and true tractor and sprinkler irrigation systems as symbols of the modernization of farming, they often forget about other tools that are essential parts of the modern farmer’s repertoire, such as moisture meters.

“Why would a farmer need to use moisture meters for crops? How are these devices used for farming,” you ask?

The answers to these questions depend on a few different factors, including:

So, without further ado, here are a few uses for moisture meters for crops, and why they’re so vital to modern farming techniques.

Use #1: Hay, Straw, and other Baled Crops 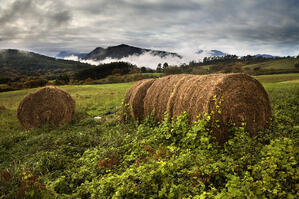 Moisture is an enormous concern for baled agricultural goods, particularly for hay and straw. If a hay bale has too much moisture, spoilage can occur.

However, spoilage may be the least of a hay maker’s concerns. As bacteria multiply in wet hay, not only do they consume the nutritional value of that hay, rendering it less useful as feed for animals, the hay begins to get hot. If bale moisture exceeds 20 %MC for almost any type of bale, there is a significant risk that the bale will get so hot that it may combust, causing an explosion that can destroy the hay storage and cause severe bodily harm to people nearby.

Suffice to say, this is an event that every farmer will want to avoid.

To avoid spontaneous combustion in hay, farmers can check their hay’s moisture content before and after baling by using a hay moisture meter with extended-length probes. Farmers stick the probes into the hay a few times and take readings from different angles, averaging the results to get the most accurate readings. By doing this both before and after baling, farmers can know their risk for bale combustion. 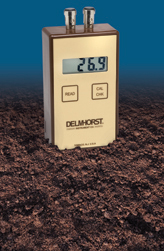 Beyond using special hay moisture probes to verify the moisture content of hay, farmers will also use special soil sensors to check the available moisture of their soil.

Why “available moisture” and not “moisture content?” Because, when it comes to measuring soil moisture, it is important to know how much moisture your plants will be able to extract from the soil, not just how much moisture is actually in the soil.

Soil moisture meters such as the KS-D1 get a reading using specialized soil sensor blocks to check how much moisture your plants could absorb from the soil. Instead of simply sticking a metal probe directly in the dirt, these sensor blocks incorporate a special medium, such as gypsum, that absorbs and bleeds moisture until it reaches equilibrium. The more moisture that the gypsum block soaks up, the more moisture will be available to your plants.

It is important to note that these sensor blocks work best in loamy clay, as other soil types may not allow equilibrium to be achieved as easily.

With the data gathered from these soil moisture meters, farmers can know exactly when they need to add water to their fields, and how much will be needed to bring their soil to the right amount of moisture for growing their plants without over-saturating the soil and causing unnecessary erosion. 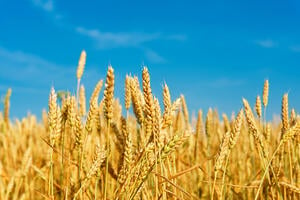 When selling (or buying) grain, grain moisture meters are a must-have tool for getting a fast measurement of a grain product’s moisture content. People who are buying grain don’t want to pay for mostly water weight, not to mention that overly-moist grain is more prone to spoilage.

To make sure that grain is in a safe moisture range, and to avoid paying for more water than grain, specialized grain moisture meters are used to take a reading of the moisture content of grain. These moisture meters use plates with penetrating pins to pierce a sample of grain and get a moisture reading quickly.

Because of how fast a grain moisture meter can take a reading of grain, it is possible to take dozens of samples and test them in a few minutes, rather than having to wait for hours like you would with an oven-dry test. This can speed up the process of measuring grain for sale immensely, and even prevent a few headaches.

Share Your Favorite Uses for a Moisture Meter for Farming!

While there are many other uses for moisture meters on a farm, the above examples are three of the most common ones.

Have another use for moisture meters on the farm that you’d like to share? Leave your suggestion in the comments below!