Using a Moisture Meter for Soil 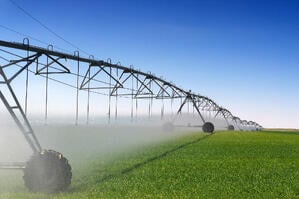 Farming is a tough job. Lots of people think you can just stick any old crop in the dirt and get results, but there are an enormous number of factors that can ruin the viability of a crop. Each and every crop has its own unique needs when it comes to nutrients in the soil, temperature tolerances, growing space, and moisture.

Of the above, moisture is perhaps one of the most important factors in growing healthy crops. Without enough water, crops will wither and die, causing a total loss for the farmer. This is one reason why so many farmers carefully monitor the available moisture in their soil year-round. Knowing when your soil needs irrigation can mean the difference between a bountiful harvest and being left with a barren, lifeless field of wilted plants.

The question is, “how do farmers know when their soil needs irrigation?”

When farmers need to be able to monitor the available moisture of their soil and get reliable information quickly, they use special soil moisture meters.

How do Moisture Meters for Soil Work?

Soil moisture meters, such as Delmhorst’s own KS-D1 model, use special electrodes that are placed deep within the soil to take readings. For the KS-D1 meter, the electrodes that are typically used are the GB-1 Gypsum Sensor Blocks. These blocks are made out of gypsum that is cast around two concentric, stainless steel electrodes. The gypsum portion of these electrodes absorb and bleed out moisture until they achieve equilibrium with the surrounding soil. When you want to take a measurement of the soil, simply hook up the moisture meter for soil to the electrode and activated it.

Why use gypsum blocks instead of simply sticking two metal probes into the soil? Because, in farming, it is the moisture that can be extracted from the soil that is important, not the soil's actual %MC (moisture content). The gypsum blocks absorb moisture from the surrounding soil, which provides a better measurement of how much moisture your plants will be able to absorb from the soil as they grow than a %MC measurement.

However, before you can use the moisture meter probe, you have to prepare a few things first. The gypsum blocks have to be placed in the soil and given time to achieve equilibrium. The installation process should go something like this:

When choosing where to place these blocks, look for areas where the plants are representative of the whole field. Avoid both high and low spots in the field, as well as areas where the slope of your irrigation changes to prevent irregular readings.

Also, blocks should be installed well away from sprinkler heads and pipes. Being too close to a sprinkler head can cause inaccurate readings.

We recommend that you install a second station of electrodes roughly 10” to 20” away from the first. You can use this second station to verify readings from the first and ensure that abnormally high or low readings aren’t the result of a fluke. The most common causes of a discrepancy between two stations are poor distribution of water from the sprinkler system, shifts in sprinkler distribution caused by the wind, differences in the concentration of roots surrounding the gypsum blocks, and even slight differences in the granularity of the soil itself.

With a soil moisture meter, getting a complete picture of the moisture that is available to your crops is quick and easy. Learn more about how to use moisture meters for soil by contacting Delmhorst today!