Pin meters are the most commonly used moisture measuring devices on the market. They are a surefire way to obtain three key pieces of information quickly and accurately, including: 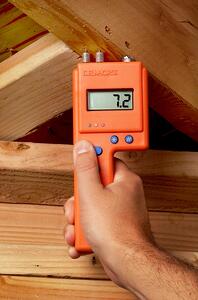 Pin-type meters operate on the principle of electrical resistance; they use the wood as an element in a circuit by driving two pins or electrodes into it.

The electrical resistance method for determining moisture content had been around for years, but became fully accepted by the industry in the late 1940’s, when Delmhorst introduced its ram-type electrode with two insulated pins.

To put it simply, the higher the electrical resistance is in a piece of wood, the less moisture there is in that piece of wood.

This is known as a resistance measurement. This method works because moisture is an excellent conductor of electricity and dry wood is an effective insulator. Pin Meters are highly accurate when used in wood, gypsum, insulation, or concrete.

However, keep in mind that you may have to calibrate your meter in order to get an accurate reading because different materials will not react the same way to electricity, even if they seem to have similar properties. For example, two different species of wood, such as Douglas Fir and Oak, will not produce the same results when measured because of differences in the inherent chemical content and conductivity of the two types of wood.

The most important feature of resistance type meters with insulated pins is that they measure only at the depth pins have been driven and in a line between the non-insulated portion of the pins. So, the user can drive pins into the wood in as little as l/8” increments to read the moisture content (M.C.) at different depths, leaving no question as to actual moisture content, distribution, and range.

The advantages to using a pin meter include:

The disadvantages of pin moisture meters include:

The speed and ease with which a pin meter can give a contractor a reliable reading of moisture content in a given piece of wood may be one of the key reasons why they were adopted for use by contractors around the world.

Considering their reliability and ease of use, it is little surprise that pin meters have been a staple of moisture measurement for so many decades. If you are looking for an accurate, reliable moisture meter, then a pin-type meter may be the perfect tool for your needs.

To learn more about moisture meters, contact us today.