The Benefits of Multiple Moisture Readings in Hay Production 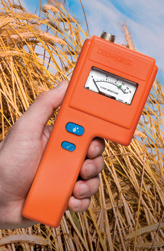 Last week, we talked about how moisture meters help farmers take measurements of moisture in hay. In that blog post, we mentioned that it was important to take multiple measurements when measuring hay.

Why would you want to take more than one measurement of the moisture content of hay? Because, as you may know, hay is a loosely-packed material before it is baled. Even tightly baled, hay is not a singular, dense object. After all, hay is typically meant to be fed to livestock, and they can’t eat a solid brick.

Because a pile or bale of hay is not a solid, singular object, there can be any number of pockets of empty space inside of it, just like there might be areas within the bale that are more densely packed. While baled hay may have fewer empty spaces compared to a hay pile, the chances of hitting one and having it throw off your readings are still high enough to warrant at least a second reading.

Other benefits of taking multiple readings in hay include:

When you average a large number of measurements, you are getting a much more reliable assessment of the condition of your hay than you could with any single measurement. Not only that, but by taking multiple reading measurements at different depths and from different angles, you are more likely to find a hidden moisture pocket than you would be with a single reading.

By finding hidden pockets of moisture that would be missed when relying on a single reading, you can identify problematic hay stacks and bales that should not be placed in storage. If one hay bale becomes contaminated with mold because of excessive moisture, that mold can spread spores to other, nearby hay bales in storage, even if they do not have excessive moisture themselves.

Moldy hay poses a health risk to the farm animals that are meant to feed on it. Not only that, stored hay that has excessive moisture may build up heat and actually spontaneously combust. Spontaneous combustion might seem like an unlikely problem to those not experienced with combustible dusts, but improper hay storage has resulted in more than one case of sudden, violent explosions. Hay-related fires have become such a problem that FEMA has released a handbook warning firefighters of the potential dangers in dealing with hay silo fires.

If ever you are in doubt as to whether you have acceptable moisture levels in your hay, take another measurement to be sure. You won’t regret the handful of seconds that it will take you to be certain.