How to Test Hay Moisture Levels to Prepare for Safe Storage 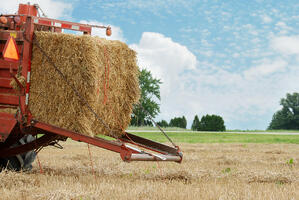 Failure to properly store your hay can lead to horrible consequences — including the potential of dangerous fire hazards. And, when the safety of your hay products (and anything else that's nearby!) is at stake, so is your revenue should something happen. This is why testing your moisture levels before and after storage is crucial. It is vital to bale hay at proper moisture levels and store it in a way that reduces mold development preserves leaves, color and even the feed value.

The problem with moist hay is that it becomes a breeding ground for fungus to grow. And, as the moisture content of hay increases, its temperature can also elevate because of the microorganisms gathering in and around it. When the temperature rises, proteins in the hay begin to degrade and it may become indigestible. When temperatures reach around 180°F, there’s a significant risk of spontaneous combustion.

Unfortunately, moisture levels can be difficult to judge, as hay may look and feel dryer than it actually is on the inside—especially when you're comparing the surface of a bale to the hay at the center of the bale. On the other hand, a moisture tester specifically designed for testing hay in the bale or the windrow (a row of hay raked up to dry before being baled or stored) can help you obtain accurate moisture readings to protect your valuable hay crop.

What Is the Right Hay Moisture Level?

Moisture levels in hay should be measured in terms of ranges — not specific points. Generally, round bales require a slightly lower moisture level than square bales. The challenge in either shape is the variability of both the electrical properties of the hay and its non-uniformity. This makes it more difficult to come up with an accurate representation of moisture.

Traditionally, the recommended moisture content for baling hay without a preservative is between 18-20%.

If your crop requires that you utilize a preservative, it’s important that you use the guidelines explained by the preservative’s manufacturer. For hay that is baled at a higher-than-recommended moisture level, the use of a specified moisture meter, drying agents, and preservatives should help you manage drying the hay to the appropriate level. In any case, we advise that you don’t attempt to bale hay before it reaches an appropriate moisture level.

How Do I Use a Moisture Tester for Hay in the Windrow?

To get a proper reading of its moisture, loose hay from the windrow should be packed into a five or 10-gallon bucket. The higher the density, the easier it is for testers with multi-pin prods to get an accurate reading. So, be sure to pack down the hay as tightly as possible before you begin to measure.

Like with baled hay, numerous tests are required to obtain an accurate, reliable moisture measurement. After taking the first reading, the operator should mix the hay, repack it, and test again several times, then average the readings.

An additional test involves choosing several large, slow-drying stems from the same area of the windrow and lying them one at a time across two adjacent points on a multi-prong electrode (Note: These readings will typically be a few points higher than the actual moisture level).

Pay attention to the areas where the hay is densest and repeat these steps in different parts of the field. Your decision to start baling should take into consideration the variation found among windrow readings and the average stem moisture.

How Do I Use a Moisture Tester for Hay in Bales?

Good question! Here, you'll need a hay moisture meter that has an extended-length probe that can penetrate to the core of the bale. This way, you can get moisture measurements from the center, where the majority of moisture is likely to be. The exact length of the probe you'll need may vary depending on the size of the bale, but a 10" or 18" prod should suffice for most bales. 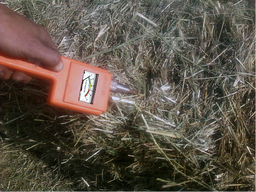 Another thing to keep in mind is that after hay has been baled, the internal density and stem-to-leaf ratio are often inconsistent throughout the bale. Because of this, it’s necessary to test a bale in several locations and average the readings — taking specific note of the high readings. We also recommend testing the bales in different locations as field conditions could affect the moisture levels.

A firm, uniform contact will yield more accurate results, so the prod should be driven across bale slices.

The hay producer can install a micro-controller-based moisture meter in the tractor cab and connect it to a sensor in the bale chamber to produce on-the-go moisture monitoring — without leaving the cab. The microcomputer collects and processes eight separate readings that update every four seconds. The meter then displays the average and highest reading.

The FX-2000 is a reliable moisture reading tool for on-the-go monitoring. If you’re seeking HOW to do this, using a microprocessor-based continuous monitor with the FX-2000 is an easy and reliable method.

The more variations you measure in your hay, the more tests should continue to take to ensure a proper measurement.

Keeping your hay baled at less than 20% moisture is one of the key steps to maintaing a safe storage. Please also consider the inconsistencies that may occur due to the humidity in the air. Ensuring that hay is not baled at moisture levels above 20% is a significant step toward safe storage. A high-risk period is anywhere from two to six weeks after storage is complete — so be sure to take extra precautions during this time period.

Stable hay hovers around 125°, but when you notice internal temperatures rising to 150°, be sure to have your moisture meter ready!