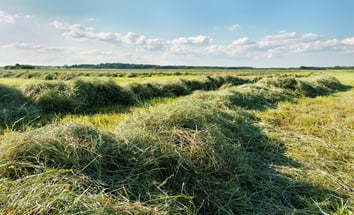 Hay harvesting is a job that requires a highly precise measurement of the moisture content of the hay before and after baling. Having too little moisture can compromise the quality and nutritive value of the hay—too much moisture can promote the growth of microbes and, in extreme cases, cause the spontaneous combustion of stored hay.

But, when should you measure moisture in hay? Should hay’s moisture content (%MC) be measured while hay is still in the windrow or when it’s already been baled? The answer is that hay should be checked for moisture content at virtually every step of the harvesting process, from initial cut in the windrow, during baling, and after bales are made. Checking at these stages gives you confidence that %MC is within acceptable ranges at each stage.

However, the process for measuring moisture in hay is a little different depending on whether you’re checking loose have vs. baled hay. Some key things to keep in mind include:

The Type of Moisture Probe You’ll Use

When you’re checking loose hay in the windrow, it’s best  to use a moisture meter that has a probe with multiple pins—like the #831 probe for the F-2000 hay moisture meter. The multiple tips on this probe allow for a better average measurement of the moisture content of a clump of hay in the field. However, these pins are too shallow to get a reading deep inside a bale of hay.

For hay bales, it’s better to use a probe that has a longer prod, such as the 830 series probe, which comes in sizes ranging from 10” to 36” long.

The F-2000 moisture meter has a universal probe socket at the top to allow farmers harvesting hay to quickly and easily switch between both kinds of probes when needed.

To ensure that the readings represent a  large portion of the windrow or bale, it’s important to take multiple moisture measurements. More measurements mean a better sample size of the hay’s moisture content.

How many measurements you need to take may vary between loose hay and baled hay.

With loose hay, you’ll have to walk to multiple points in the windrow to take samples from different parts of the field. This is the best way to ensure that you’re not getting an odd reading from one wet patch of hay.

With baled hay, you just have to remove the prod and reinsert it in a different spot and angle a few times so you can establish an estimate of the average moisture content of the bale as a whole.

For hay that’s already been cut, timing is everything. As the hay sits out in the sun or the rain, the moisture content of the hay can change.

Loose hay needs to be checked as close to when it will be baled as possible. This helps ensure that there is minimal difference in the hay’s moisture content between when it is first measured and when it is baled.

To this end, many farmers who grow hay use baler-mounted moisture meters such as the FX-2000. This meter, when connected to the sensor mounted in the baler, can check the %MC of hay as it’s being baled. Taking readings during baling gives the hay producer clear guidelines and a little less to worry about

For baled hay, the timing of measurements is often less critical. The important thing is usually to make sure that the %MC of the bale is in the optimal range for the type of bale it is. Small square bales are less tightly packed than other bale types, so they can handle moisture in the 18-20% range while larger, denser square bales need moisture to stay in the 12-16% range for safety reasons. Round bales typically require a moisture content between 14% and 16%.

Testing the moisture content of hay before, during, and after baling is crucial for producing top-quality feed to meet the demands of livestock owners—and moisture meters for hay are the best way to get a fast, accurate measurement of %MC in hay.