4 Reasons You NEED to Detect Moisture in Your Hay 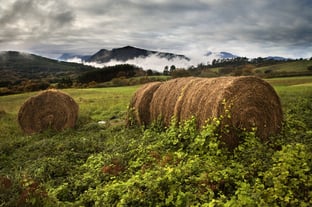 Moisture in hay is one of those things that laypeople rarely ever think about. If the thought of monitoring hay moisture content did cross their minds, they’d probably wonder “who cares if the hay is a bit too wet or dry?” However, the moisture content of hay is a constant concern for agricultural specialists all over the U.S.

There are many reasons why you need to be able to detect moisture in your hay—such as:

It may seem odd, but if hay’s too wet, then it could actually end up catching fire if it’s tightly baled. Spontaneous combustion can occur in wet hay because of bacteria that grow out of control in the damp, nutrient-rich conditions they find there. As the bacteria continue to multiply, they can cause a buildup of heat and pressure that can result in the hay bale catching fire.

More than one farmer has been surprised to hear a loud boom coming from their hay shed and found the roof damaged or missing because of a sudden explosion.

The best way to avoid this problem is to check the moisture content of hay to make sure that it’s at the right levels for safe baling and storage.

Even if the hay doesn’t catch fire because of extra moisture, the bacteria that grows in wet hay can still do a number on the hay’s quality. Wet, bacteria-infected hay is not suitable for use as feed, and may, in fact, be harmful for animals to digest—meaning that it will have to be thrown out.

Another spoilage risk with wet hay is the growth of mold—which can pose a respiratory risk to farmers working near the spoiled hay.

On the other hand, you’ll want to make sure that your hay isn’t too dry, either. Dry hay becomes very brittle, losing the leafy portions of the plant that provide the majority of the nutritional value.

To avoid both spoilage and reduced nutritional value, you need a way to check the moisture content of hay to keep it in a healthy zone between the two extremes of too wet and too dry.

Low-quality hay is hay that isn’t going to fetch a high price on the market—and, that’s assuming it’s in a condition where it doesn’t have to be thrown out. A high or low moisture content can negatively impact your ability to sell the hay for a profit. Considering all of the time, money, and effort that you put into growing your crops, it’s important to get a return on that investment.

By monitoring moisture in hay, you can maximize the quality—and thus the value—of your hay.

How can you detect moisture in hay? While many farmers like to “eyeball” it by using simple tests like “does it look wet/dry,” the truth is that such manual tests aren’t reliable enough to count on.

A better, more reliable and accurate method of testing hay moisture is to use hay moisture meters. These devices pass a small electrical current through a probe that you insert into a bundle of hay and measure how much resistance there is to the current. The more water there is in the hay, the less resistance there will be, and vice versa.

This measurement is then displayed as quantitative value that lets you know exactly how much moisture there is in the hay being tested so you can make informed decisions regarding whether to water the hay, dry it out some more, or prep it for baling/storage right away.

There are a few different kinds of moisture meters for hay, from models that can be mounted in your baler’s cab to take readings as you’re baling hay, to analog meters that can detect extremely low moisture content percentages.

You can learn more about detecting moisture in hay by checking out the free guide at the link below or by contacting us today! Delmhorst has decades of experience in helping agricultural experts with all of their moisture testing needs.