What’s the Difference Between Measuring Moisture in Hay vs. Grain? 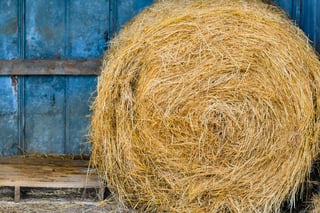 Some users often ask “why isn’t there a single be-all, end-all device for measuring moisture in hay, grain and other crops?”

The short answer is that there are a lot of differences in the different crops grown by farmers that make it difficult to create a universal agricultural moisture meter that can do everything. So, manufacturers make specialized moisture meters to address the needs of specific crop types.

Take, for example, hay and grain. What is the difference between measuring moisture in hay vs. grain that requires entirely different approaches to get accurate results?

Differences in the Field Check

When preparing to harvest either hay or grain crops, farmers first take measurements of the moisture content (%MC) of their crops to make sure they’re ready for harvest. Although much of this process is similar—collecting samples from around the field, compacting them and then taking a measurement—the specific nature of hay vs. grain requires that different approaches are taken for the moisture measurement.

Hay tends to be large and semi-soft, so farmers can wad several pieces of it up and take a reading with a multi-pronged pin. This ensures enough contact with the hay to get an accurate measurement of the hay’s %MC.

However, most grain crops are small, hard and loosely-packed—the grains tend to shift around too much for pins to make solid contact. So, to get an accurate reading, grain moisture meters often use a cup-type sensor—like the one used by the G-7 grain moisture meter. Users simply pour grain into the cup, cap it and then take a reading.

Checks During the Harvest

One of the key differences between hay and grain moisture checks is that some hay moisture meters are designed to keep taking readings of hay as it’s being baled for later storage. These baler-mounted hay moisture meters let farmers know the moisture content of their hay without having to stop baling.

Typically, hay is stored in bales for long-term storage, while grain is put in the silo until it’s ready to be used or transported elsewhere.

Checking hay in a bale typically requires the use of a moisture meter with an extended-length prod (anywhere from 10” to 18”). These long prods are needed to reach the center of the bale and get an accurate assessment of the moisture therein.

Because of how tightly packed hay bales are, it’s vital to know the %MC deep in the bale. If hay is too wet, it could cause bacteria to grow. This can lead to the bale heating up from the pressure and even catching fire or exploding. Also, if the %MC of the hay is too low, then it loses nutritive value.

Testing grain in storage is a bit different. Most of the time, grain isn’t packed tight, so spontaneous combustion isn’t as much of an issue. This also makes it easier to pull a sample of grain from storage for testing (assuming it hasn’t been allowed to freeze solid in a cold silo), so testing in storage is often similar to testing in the field.

The Biggest Difference Between Hay and Grain Moisture Testing

Of course, there’s one fundamental difference between hay and grain crops—they each react differently to an electrical current.

Moisture meters typically use the electrical resistance of a crop to determine how much water is present in it. Since water conducts electricity, the less resistance there is, the more water is present. However, the conductivity of the plant can affect readings as well.

Because plants have different electrical resistances, moisture meters need to be specially calibrated for making checks in specific types of plants. However, even within one category of crop there may be dozens or hundreds of different plant species. Each of these plant species might react differently to electricity. This is why many moisture meters built-in corrections for a variety of grains.

Whatever crop you’re harvesting, Delmhorst has the right moisture meter for your needs. Learn more about using moisture meters for agriculture by contacting us today!