Always check the moisture content (MC) of incoming lumber. It is critically important for a wood products manufacturing operation to have lumber that is at the correct moisture content. Failure to achieve this goal often means a loss in quality and, potentially, repairs or replacements of defective products — flooring, cabinets, furniture, guitars, millwork, drumsticks and more. Rx #1 in this series gives suggested target MCs; fine tune these for a specific customer.

NOTE: Even when the kiln MC is perfect, the storage of lumber between the kiln and the user can be a source of moisture change. Storage of lumber at the wrong relative humidity can, in a few weeks, begin to increase or decrease the lumber’s MC above or below acceptable levels. Heated storage at the correct relative humidity, or even wrapping all six sides of a pack in plastic wrap, can stop any moisture changes in storage. 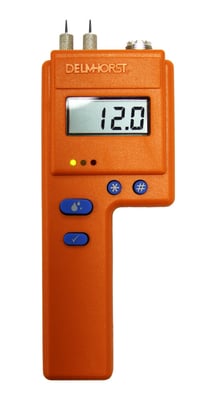 We have two concerns when evaluating the MC of incoming lumber: the average (or mean MC) and the variability of the MC around the average. To be clear, if the average is 7.0% MC, a reasonable target for many operations, but with pieces ranging from 4.0 to 10.0% MC, the variability is likely “way too high.

It is ideal if we can measure every piece of lumber with a so-called “in-line moisture meter.” Such devices are quite expensive, but are certainly worth it for large manufacturing operations. For most operations, the average MC and SD, if taken from about 30 randomly chosen samples from a load, allow a fairly accurate estimate of the total population of lumber, even though only 30 pieces were measured. (It is much like the estimates made of the voters’ choices in an election—random samples of 1,000 people can predict the outcome quite accurately.)

Measuring 30 samples from a load can be a bit time-consuming, but using a pinless meter makes the job much quicker.

A second question when evaluating incoming lumber is whether to accept the lumber as having the correct average MC or rejecting it. Indeed, there are rules for this acceptance sampling. For example, if taking 30 readings and after the first 25 everything looks perfect, it is a good guess that this lumber is OK.

Unfortunately, the precise acceptance sampling technique requires someone, perhaps from a Community College or Extension Business Office, to work with you to set the exact procedure. . . the last thing we want is to reject a load that is actually OK.

I have seen some operations that buy KD lumber using a pin-type moisture meter on incoming lumber before the lumber is even unloaded from the trucks. They use insulated, 1/2” long needles that are driven in the edge of the lumber at a point about 1/4 of the lumber’s thickness from the top or bottom of a piece. They measure 10 pieces and if one is over 8.0% MC, they measure 10 more. If the second sample has one over 8.0% MC, they reject the load. You would fine tune these numbers for your operation (note that 1” needles are also available, but with KD lumber that has a very small gradient, the shorter needles will work fine and will be less likely to break or bend).

With an in-line meter, only the wet pieces would need to be redried. Accumulate the wet pieces and when enough for a kiln load is accumulated, then put it into the kiln for a day or two.

In either case, use a kiln setting of about 130˚F and about 6.0% EMC. Precise instructions are on page 95 of DRYING HARDWOOD LUMBER, which is on the Internet

The Delmhorst team would like to thank The Wood Doctor for sharing his post on our blog. If you want to learn more about using moisture meters to check incoming lumber, you can contact us right away!