How a Moisture Meter Knows Your Hay is Ready to Bale 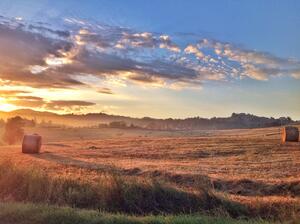 When it comes to making a perfect hay bale, moisture is one of the most finicky and difficult to manage factors of the entire process. Farmers are up well before the crack of dawn, just to get a chance to maximize their hay yield by harvesting as soon as their hay hits a “sweet spot” in its moisture content.

How do hay farmers know when their hay is ready to bale? By checking the hay’s %MC with a hay moisture probe for unbaled hay, of course. 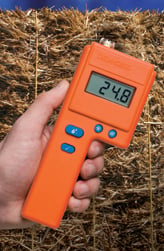 Before the actual collection of hay in the field begins, farmers check the moisture conditions of the field. After the hay is cut and placed into windrows, taking measurements with a probe-type moisture meter can verify if the hay is in the appropriate moisture range for collection.

The appropriate moisture range of hay being prepped for collection will change depending on factors such as the density of the hay bales being made and whether the hay is going to be shipped over long distances or stored for near-future use.

With a hay moisture meter such as the FX-2000, it is possible to set an alarm for a specific %MC, which can be used to alert a hay collector when the maximum allowable %MC for the harvested hay has been exceeded. In fact, this particular device can be attached to the hay baler to take moisture readings during the baling process, saving time and providing an instant alert for if the hay is too dry or too wet to bale anymore.

How a Moisture Meter Works in Hay

You might be wondering how the moisture meter generates a reading in hay. Well, for a probe-type moisture meter, the process is quite similar to the way in which a pin-type meter takes a measurement in wood or another solid object. The major differences are in the size of the measuring element and the density of the object being measured.

Just like with a pin-type meter, a farmer taking a moisture measurement in hay takes the electrodes attached to his or her moisture meter and inserts them into the material to be tested. Upon reaching the desired depth, the person taking the measurement activates the meter, sending an electrical current running through one probe. The other probe receives the current, and the meter calculates the moisture content of the material based on how much electrical resistance there is to the current. 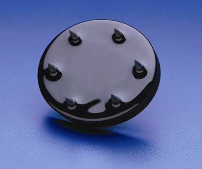 Because hay is a loose material, particularly before being baled, it is often best to take multiple measurements at different penetration depths and average the results. This way, a farmer taking measurements is much more likely to find a random pocket of wet material that would be missed with a single reading, as well as eliminating the possibility of variations in the density of hay in a windrow causing unreliable results.

With a probe-type meter using 10”-18” long probes, you can quickly and easily gauge if your hay is ready to bale. Simply take a few measurements in the hay, average the results (some probe type meters can average up to 100 readings for you) and you’ll know if the hay is too wet or too dry to bale.